Skip to content
The production,
entirely crowdsourced by TikTok users, will get the stage treatment for a limited time in January. The filmed concert, which will stream live on January 1, will benefit out-of-work performers.

Like the animated film, the musical follows a precocious rat named Remy on his journey to culinary perfection in a Paris kitchen.

Details are slim about who will star in the upcoming concert, but producers have promised the cast includes “a bunch of beloved Broadway actors” along with the TikTok creators who made it. They can hardly believe it’s real, either.

It often takes years for new theatrical works to officially debut. Not so for TikTok’s “Ratatouille.”

It all began in August, when user Em Jaccs shared a clip of herself singing an ode to Remy.

”
Remy, the ratatouille, the rat of all my dreams,” she
sang a capella, in an appropriately high-pitched voice for a rat.

In October, composer Daniel Mertzlufft
added some more vocals and instruments under her lyrics — and a phenomenon was born.

The rest of TikTok started to chime in with their own contributions to the score.

There’s the
stirring ballad sung by Remy’s culinary hero, Gusteau, “Anyone Can Cook,” written and performed by New York University student RJ Christian. A comedic, accordion-heavy anthem for Remy’s portly rat father
from Gabbi Bolt in Australia.
A tango duet for no-nonsense chef Colette and the awkward Linguini, performed to icy perfection by users @aaaacaia and @blakeyrousey.
One user,
Shoebox Musicals, created a mock set for the musical complete with a “Les Miserable”-style turntable. Another, puppeteer Brandon Hardy,
created costumes for Remy and his fellow rats. Designer Jess Siswick
created the playbill and original image — ratatouille stacked in the shape of Remy the rat — that the upcoming production has used in its promotional materials.

Since Jacobsen shared her original video that kickstarted the “‘Ratatouille’ challenge,” the platform says that 200 million TikTok users have viewed the crowdsourced choreography and heard the original score.

And with TikTok features like “duet,” users were able to add their names to the musical’s increasingly long list of contributors. Of course, they had the source material of “Ratatouille,” from Pixar’s oeuvre.

Seaview CEO Greg Nobile said in a statement that he was impressed by the way TikTok users performed on the platform, a “new outlet for creative collaboration.”

Already hailed as the “biggest theatrical event of 2021 (so far),” the concert version — presented in association with TikTok and ticket service TodayTix — of “Ratatouille” will be performed only once and be available to stream for just 72 hours starting on January 1, 2021.

Ticket sales will benefit the Actors Fund, a non-profit that supports performers and behind-the-scenes employees in the entertainment industry.

Actors Fund President & CEO Joseph P. Benincasa said in a statement that he believes the project “is sure to bring joy to arts lovers far and wide this holiday season, while at the same time will help raise much-needed funds for those in need in our entertainment and performing arts community.”

Relief for the performing arts industry is sorely needed. The pandemic shuttered Broadway in March, and it’ll likely stay closed until at least summer 2021. Regional theaters, meanwhile, are struggling to stay afloat while they can’t produce indoor performances. In August,
the Brookings Institute estimated the pandemic would result in the loss of about 1.4 million jobs in the performing arts — about 50% of all arts jobs. 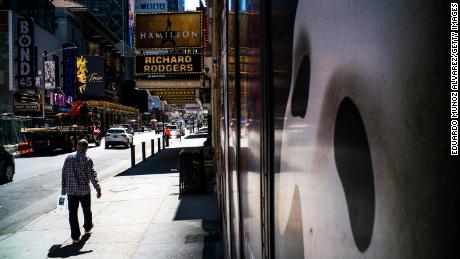 While much of TikTok’s “Ratatouille” was created by theater enthusiasts who work other jobs, Jacobsen said that professional set designers, costumers and performers — many of them out of work during the pandemic while theaters are closed — contributed their talents, too.

“I’ve been tuning in myself to many benefits for The Actor’s Fund over the past few months and the idea that now I feel like my work is playing a small part in bringing one to life is so thrilling for me,” Jacobsen told CNN.

In a clip confirming that the “Ratatouille” concert was indeed real, Jacobsen thanked the millions of TikTok users who made it a phenomenon.

“It’s like, you did this, TikTok!” she said. “You made this a thing! You are the cause of this great benefit for the Actors Fund, to help so many people out of work.”

Though her video was the impetus for the musical’s creation, Jacobsen and her fellow collaborators don’t take ownership of the work. It belongs to TikTok — the little show that could about the little rat who could cook.