By Riath Al-Samarrai for the Daily Mail

Anthony Joshua labelled himself a ‘psychopath’ ahead of his clash with Kubrat Pulev – and then became involved in an angry confrontation with his Bulgarian challenger at Friday’s weigh-in.

Following a sedate build-up to the heavyweight world title showdown at the SSE Arena, the mood quickly turned as Joshua prepared to step on the scales at the Hilton Hotel.

In response to moderate goading from Pulev, IBF, WBA, WBO and IBO champion Joshua was heard to call Pulev a ‘p***y’ as they were pulled apart by security. 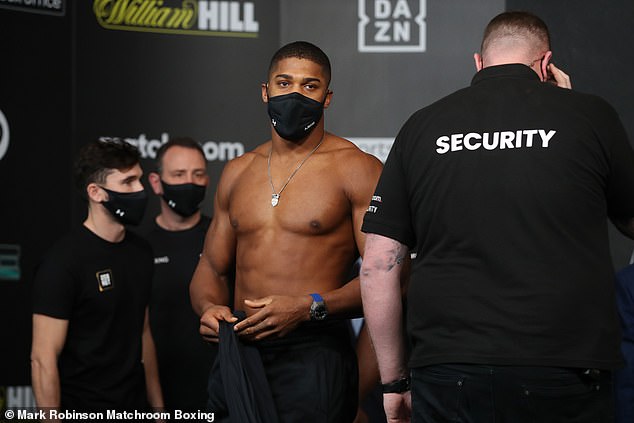 He had earlier indicated that his first fight in more than a year will see a return to a more dramatic style compared to the jab-based victory that secured his rematch win over Andy Ruiz last December.

He said: ‘I’m ready for a 12-round fight. (But) if a shot lands and causes a lot of damage I will be looking to take him out. That doesn’t leave someone. Once a killer always a killer.

‘I sleep good. Certain people can’t sleep at night because they’re really tuned up for a fight but I must be a good psychopath because I’m sleeping like a baby. I’m not worried.’ 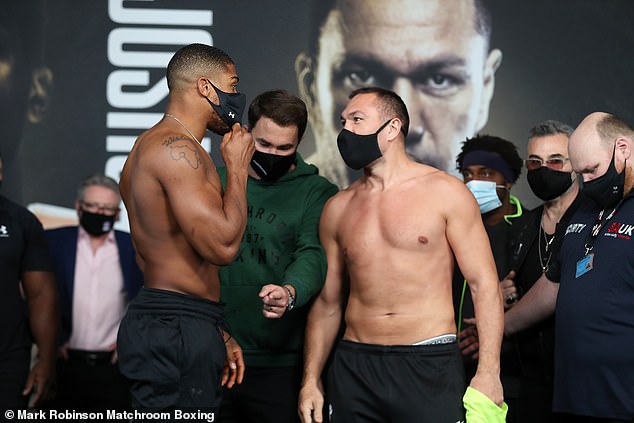 Joshua weighed in at 240.8 pounds, three heavier than for his rematch with Ruiz.

Pulev was fractionally lighter at 239.5 pounds.

After the weigh-in, Joshua said: ‘I have studied him and he thinks he is a warrior but he is up against a real one now. When people come in the ring with me they are confident but I take their soul away and get them out of there.’